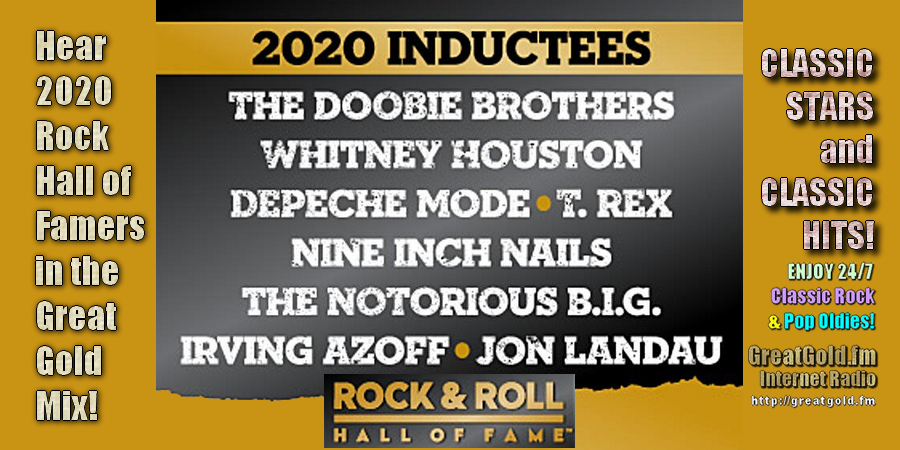 The Rock and Roll Hall of Fame and Museum at Cleveland, Ohio, USA, has announced the 2020 Hall of Fame Inductees to be honored at a ceremony in May, 2020. The combined online Fan Vote top five has been combined with the votes of official members of the body that names new inductees each year. The Grand Total finds the Performer winners to be The Doobie Brothers, Whitney Houston, Depeche Mode, T-Rex, Nine Inch Nails, and The Notorious B.I.G., while the Ahmet Ertegun Award goes to Jon Landau and Irving Azoff.

NOTE: The 2020 Rock & Roll Hall of Fame Induction Ceremony Has Been Postponed Due to Worldwide COVID-19 VIRUS Crisis.

ABOUT THE AHMET ERTEGUN AWARD WINNERS: IRVING AZOFF is described by the RockHall.com official website as “a hardworking pioneer in the music industry, Azoff is often cited as the ultimate rock manager and has brought many successful bands to light in the past decades.” Regarding JON LANDAU, RockHall notes he started “as a pioneer rock journalist in the mid-Sixties, Landau contributed to the earliest rock publications, including Crawdaddy!, The Phoenix and Rolling Stone. Later, Landau became a long-time co-producer and manager of Springsteen.”

The 2020 Rock & Roll Hall of Fame Induction Ceremony will be held at Public Auditorium in Cleveland, Ohio on May 2, 2020, and will be preceded by Induction Week with celebratory events and the opening of the 2020 Inductee exhibit. Tickets go on sale to Rock Hall members on February 25th and to the public on February 27th at 10 a.m. ET at ticketmaster.com.

The place to hear the best of the 2020 Rock & Roll Hall of Fame Inductees is GreatGold.fm Internet Radio, the home of Classic Hit Oldies, GreatGold Hits, and GreatGold Music.

In addition to RockHall of Famers, GreatGold gives Extra Plays to singers and musicians born during the month in which you listen. Plus, at certain times during the year, GreatGold puts the spotlight on special songs from our seasonal and holiday, and special event files to add some spice. You can listen while visiting our website at http://GreatGold.fm Internet Radio or find “greatgold” in your favorite Mobile App. See our APPS list on the GreatGold website to download one of the Apps that carries our GreatGold Music stream.