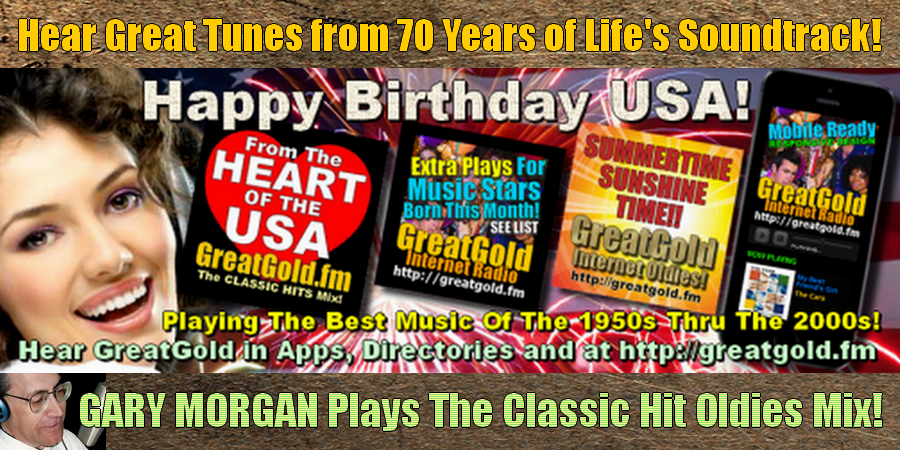 THIS MONTH, we’re spotlighting singers and musicians born in the month of July by giving their songs Extra Plays. PLUS, GreatGold.fm Internet Radio is observing the 4th of July USA Independence Celebration by playing Patriotic Songs once every hour until the end of the month. We’ll mix them in with your favorite Rock, Pop, Soul, Motown, Blues and Oldies Classic Hits from the 1950s, 60s, 70s, 80s, 1990s, into the 2000s. IN ADDITION, our Summer Tradition of playing Summer Songs continues at GreatGold.fm during our Summertime Sunshine Time, 24/7.

JULY ALSO BRINGS THE SUMMER MONTHS and our tradition of playing Summer Songs at least once every hour throughout the Summer Time begins anew this month at GREATGOLD, the Home of GreatGoldHits and ClassicHitOldies. In addition, we’re spotlighting singers who were born in the month of July over the years of musical history, and bands with members who were born in July, too, by giving their songs Extra Plays.

For the singers and band members having birthdays this month being played today on GreatGold, in addition to Patriotic Independence Day tunes and our Special Summer Songs, go to the list of Birthday Stars.