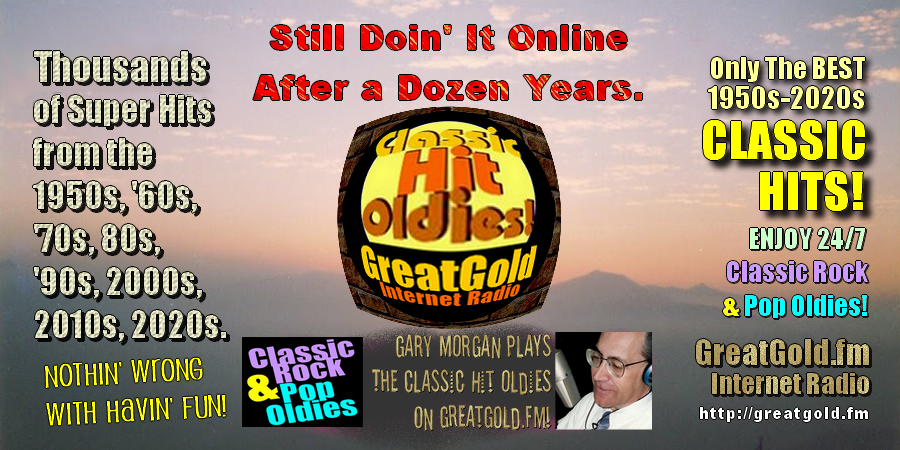 LOTS OF MUSIC LOVERS have been enjoying the GreatGold tunes popular for generations like yours and mine. At GreatGold.FM Internet Radio we keep The Greatest Music front and center by playing A Super Mix of the Best Hits from seven decades of the songs that made you and me feel goooood in the 1950s, 60s, 70s, 80s, 90s, 2000s, 2010s and 2020s. Gary Morgan and Friends at GreatGold.fm Internet Radio play the greats day and night for our internet friends around the world from our studio in the USA.

ENJOY THE FAVORITES from our extensive music library wherever you are. Over the years since we started doing it on the internet in 2008 we’ve had listeners from over 125 countries and counting. Many of them have come back often to listen and enjoy again and again. We hope you are enjoying yourself and will be among those who listen to the GreatGold.fm music stream often in your favorite music app, internet directory, music website, or the radio player on our authentic http://GreatGold.fm on our internet radio headquarters website.

EACH MONTH we give special attention to music stars and musicians who were born during that particular month. This month we’re playing the works of those born in October more often than we usually do. AND, because it’s Autumn and the month of Halloween, we throw in some of our Fall Favs and Halloween Songs from time to time this month to keep with in tune with the season.

SEE THE OCTOBER FRONT PAGE for a complete list of the Birthday Buddies featured this month.