THE MONTH OF SEPTEMBER spotlight is on music stars with September birthdays, plus, September is the start of mixing in what we call Fall Favs. Fall Favs are special songs that have Autumn or Fall in the titles, performed by various artists and heard about once each hour. In addition, every once in awhile we’re throwing in a new and noteworthy independent or new artist with a Classic Hits Wannabee. 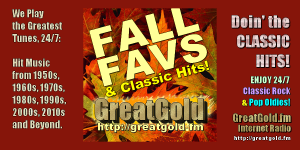