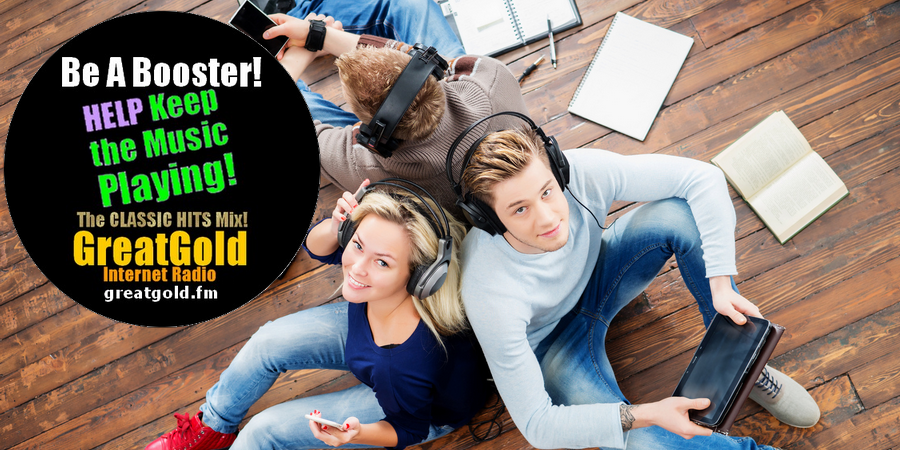 The GreatGold Classic Hit Oldies internet radio stream is on hiatus until further notice. GreatGold.fm, which has played a mix of Classic Rock and Pop Oldies from the 1950s through the 2000s since 2008, ceased streaming September 30, 2017. The station, was started by a retired over the air radio broadcaster and continued to exist through funding derived from his retirement income. Due to personal emergency, it is necessary to redirect the money.

The last song played before the stream was stopped on September 30th was “If I Ever Lose This Heaven” by Average White Band, followed by a promotional message about how listeners could Be A Booster to Help Keep The Music Playing. Then, the audio of the music stream was silent. Hopefully it will reappear when funds become available to do so in the future.

“Even though we tried to put it off as long as we could, we have finally reached the point that we must pull the plug on the GreatGold.fm Internet Radio Classic Hits Mix”, said Gary W. Morgan, GreatGold host and program director. “Our website, itself, with internet pages of singer and musician birthday details, and other information, will continue, but the audio music stream must go on hiatus.”

We have spent several weeks attempting to raise funds from donations and contributions from listeners, but we have not received the kind of response necessary to support the costs involved in running a legally operated internet radio station such as this. So, at least for now, listeners, such as yourself in countries all over the world will no longer have GreatGold.fm to turn to for our special mix of Classic Rock and Pop Oldies.

Our, Be A Booster to “Help Keep The Music Playing” fund raising promotion through the end of September, 2017, has not attracted enough attention. To put it simply, we, as the internet radio station, must pay internet play music licensing fees to legally operate.

The royalty fees we have been paying for the largest part of the past ten years are the largest part of our operating expense every month. Even though the music lover who started this internet radio station would dearly love to continue, finances do not allow that to happen, unless you and other music lovers help out by doing your part to Help Keep The Music Playing.

We have been financing this internet station on a retired person’s income as the hobby of a former, professional, over-the-air radio personality and news person. That limited retirement income has not increased substantially since we began, but, the expenses have gotten greater and greater every year. On top of that, the station’s operator must now use the music money that has been coming out of his own pocket for other purposes.

“The music licensing fees for the stream take too much out of my retirement income,” Gary Morgan points out. “I must use the funds to, instead, pay off final costs involved in the recent funeral and burial expenses of my sister. I’ve been trying to get funeral expense help through https://GoFundMe.com/memorial-for-sister-susie, but donations have been slow. That result, plus little response to the GreatGold Be A Booster campaign at http://GreatGold.fm/booster, combined, make it necessary to put the GreatGold Classic Hit Oldies stream on hiatus at the end of September.”

“After a few months of paying off the final funeral costs and placing a grave marker at the site of my sister’s final resting place, I expect to return to playing music from my library of several thousand hit songs from the 1950s through the 2000s, again, because it is a fun hobby, and pleasurable to share my personal library of some of the greatest music ever recorded”, Gary Morgan says. 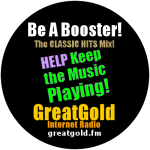 However, if you have enjoyed our Classic Hits music mix, and want it to continue sooner, rather than later, you can help us pay the music fees right away, so we can continue to play the music in the stream for your enjoyment.

We sure would appreciate your efforts to help us through the BE A BOOSTER fund raising campaign at http://GreatGold.fm/booster. If that campaign raises enough money to keep operating the internet radio station stream, we’ll crank it up again. Unfortunately, we cannot risk a hefty fine should we be caught playing the music without permission, according to the laws on the books, so, you and I, we, must cease enjoying the GreatGold Classic Hits Mix for now. In the meantime, until we’re able to legally start up the music stream again, Thanks for Listening.

If you would like to see which singer or band member is celebrating a birthday this month, the month by month listing of music artists is in our website menu, as before. So, even though we may not be playing their songs this month, you’ll be able to see what music we would be playing, if funding would allow us to be streaming again, or when we would be able to resume doing so.